Best for: Those who need a Vegan-friendly mass gainer

This mass gainer uses a 2.85:1 carb-to-protein ratio to support weight gain. Each serving provides your body with 42g of plant-based protein, 790 calories, and 120g of carbohydrates.

It also brings together a comprehensive blend of fruits, sea veggies, plant oils, greens, and grains that support daily wellness.

We’ll go through the most important deciding factors in-depth, but to start, here’s Iron Vegan Athlete’s Gainer at a glance:

In this article, we take a look at Iron Vegan’s very own plant-based weight gain powder: Athlete’s Gainer.

Iron Vegan focuses on creating vegan-friendly fitness supplements, including protein bars, protein shakes, and amino acid powders. I wanted to see how their mass gainer performs based on these factors:

After reading this review from start to finish, you will have an easier time deciding whether Iron Vegan Athlete’s Gainer is the ideal mass gainer you need for your vegan diet.

Before I start the review, I just want to share some key info about Iron Vegan Athlete’s Gainer.

Athlete’s Gainer is Iron Vegan’s take on weight gain shakes. It features a 2.85:1 carb-to-protein ratio, providing you with 720 calories – which is pretty decent for a plant-based gainer. That’s almost the same amount of calories you get by eating 3 single-patty burgers!

You also get 42g of protein in the form of fermented pea protein isolate and organic sprouted brown rice protein concentrate.

What caught my attention is its exhaustive blend of organic greens, fruits, sea veggies, plant oils, and whole grains – all of which are packed with nutrients that support daily health.

While I don’t necessarily follow the vegan diet, I wanted to see how Athlete’s Gainer fares, especially when compared to traditional weight gain shakes.

Who is Iron Vegan Athlete’s Gainer Best for?

Then, go ahead and continue reading.

However, if you are:

I don’t think Iron Vegan Athlete’s Gainer will be the best one for you.

Here are My Thoughts on Iron Vegan Athlete’s Gainer…

Each serving supplies you with 720 calories, which is decent, but definitely not the highest I’ve seen offered by a vegan weight gain shake. You also get 120g of carbohydrates in the form of pea starch and brown rice flour.

Athlete’s Gainer is also enhanced by the addition of Medium Chain Triglycerides. These fatty acids are readily converted into energy by your body – you don’t have to worry about them contributing to the formation of a bulging belly or chubby arms.

What I like about Athlete’s Gainer is its comprehensive blend of organic greens, sea veggies, fruit concentrates, whole grains, and plant oils, including:

These fruit and veggie extracts supply your body with rich amounts of vitamins, minerals, and antioxidants – all working together to promote exceptional daily health and general wellness.

This protein blend supplies you with all 9 EAAs (Essential Amino Acids), which support lean muscle growth, repair, and recovery.

Considering your limited protein options as a vegan, Athlete’s Gainer can help you meet your high protein needs each day.

I mixed Iron Vegan Athlete’s Gainer with water using a shaker bottle, and I got a rather thick and powdery shake. I got better results when mixing it with a blender, but I still found some small lumps of undissolved powder in my drink.

Athlete’s Gainer is made available in Chocolate and Vanilla. After taking my first sip, I had a little trouble swallowing it because of its strange taste. I guess this because of all the greens and veggies included in its formula.

I ended up adding a few slices of fruit and a couple of scoops of peanut butter just to make the shake a little more palatable.

Iron Vegan Athlete’s Gainer can be a bit pricey, but it has a more-affordable price tag compared to other vegan gainers. Its 4.5kg bag is good for up to 23 servings, while its 2.5kg bag can yield around 13 servings.

Doing the math, each serving of Athlete’s Gainer has roughly the same cost of a tall Caffe Mocha from Starbucks.

If you are on a tight budget, Athlete’s Gainer can be a good alternative to leading vegan gainers that can cost more.

Check Out My Results from Using Iron Vegan Athlete’s Gainer

As I had trouble enjoying each serving of Athlete’s Gainer, I found myself adding fruit slices, scoops of ice cream, oats, or peanut butter to my drink all the time.

I made sure to follow a good strength-training program and eat a well-balanced diet while consuming Athlete’s Gainer. After a couple of weeks, I managed to gain some lean muscle and put on a few pounds.

I wasn’t too excited about this weight gain shake only giving me 720 calories, so I had to consume healthy snacks all day and eat calorie-dense meals more often.

Here are some Amazon reviews that I encountered while having a look at Iron Vegan Athlete’s Gainer:

“It sucks that this is probably the highest quality vegan gainer out there in terms of ingredients. It tastes pretty bad and is super thick. Gave me some stomach problems as well, but that might just be me adjusting to it. Idk if I will try the vanilla, but need to find another gainer.”

“I’m sure this shake is great for your health but it tastes absolutely horrible. Hard to describe but it would make sense that it was blended from fermented peas and rice since it tastes like a salad that has been left out in the sun. It doesn’t blend well either so drinking it is like reverse vomiting.”

“Unpleasant taste… if chocolate tasted like the shake I would never eat chocolate again. It does not mix well, and leaves a weird feeling and after taste in your mouth. Couldn’t finish the first try.”

Is Iron Vegan Athlete’s Gainer the Right One for You?

After checking out its pros and cons, reviewing its content, and giving you my personal experience after taking it, it’s YOUR turn to decide if Iron Vegan Athlete’s Gainer will fit right into your vegan bulking diet.

With each serving giving you 720 calories, Athlete’s Gainer looks like a decent choice for vegans who want to gain lean muscle. However, if you are looking for more calories in your weight gain shake, there are other options for you to choose from.

For Those Who Need More Greens

If you want to add more organic greens to your diet, Athlete’s Gainer is a good supplement to take. It features an exhaustive blend of greens, grains, sea vegetables, fruits, and plant oils that you will probably not see in most vegan gainers sold today.

If you are a hard gainer who wants more calories in your shake, you might want to check out Vegan Naked Mass.

Each serving is loaded with a massive 1230 calories, 248g of carbohydrates, and 50g of plant-based protein. It also has an Unflavored variant for those who are not fond of overly sweet or creamy shakes.

While it only features 2 protein sources (pea protein and brown rice protein), Athlete’s Gainer still supplies you with all the amino acids needed for building lean muscle – with each serving loaded with 42g of protein.

With regards to its taste and mixability, however, Athlete’s Gainer is quite unimpressive. It’s just a bit hard to gulp down a thick, clumpy, and strange-tasting drink. I couldn’t enjoy my shake without adding in some fruits, ice cream, or peanut butter.

To be fair, I wasn’t really counting on it to have a mouth-watering taste, which is something that is rarely experienced among plant-based shakes. 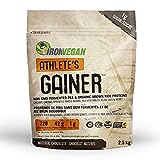 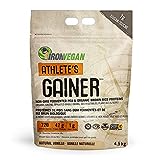 How many servings do you get per bag?

No, it does not contain nuts.

No, it does not contain creatine.

No, it does not contain arsenic.

Some reviewers say that it does have a chalky taste.